He could only be described as a true advocate, adviser, icon & everybody’s mate @ the soccer club. He was awarded Life Membership of the Club many years ago of which he held very dear & with honour.

Jamie became involved with the club 23 years ago when Nicole & Michael joined the club as “little tots”, and was soon encouraged to join the committee. Before long Jessica joined up & when Lauren reached playing age she was the 4th playing member from Jamie’s family. His son-in-law Steve has played for the club for many, many years & now 2 of Jamie’s grandsons have just completed their 1st year as players.

Families forged very strong friendships that will last forever throughout the club & Jamie was front & centre in all things good. He coached his kid’s mini & junior teams continuously & tirelessly until they were in their teens then took over the reins of the All Age Ladies Teams in the club. There was not one player, game, score or event that took place that Jamie could not remember.

Jamie filled many committee positions over the years from vice president, social secretary, competition secretary, publicity officer, sports manager & of more recent seasons the canteen manager. He was always forefront in decision making & purchasing of the clubs new strips & merchandise when necessary & was always in control of the handing out & return of team kits. But I’m sure there would be no argument that Jamie is best known for his famous St Marys Soccer Club Canteen BBQ. For years he would be tirelessly cooking & overseeing the BBQ which was well known of around the association’s grounds & local neighbourhood.

You will be sadly missed Jamie by all members of the club but fond memories of you will be held by all who crossed your path. 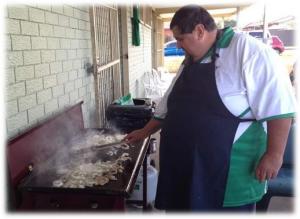 Back to All News

Want to Join our Club?

Do you want to play soccer? We welcome players at all levels to our club.  Feel free to contact us if you would like to find out more

Want to become a sponsor?

Would you like to sponsor and support your local community club? Get in touch and we can provide you with more information.